Apian is a machine built for exploring the age-old interspecies relationship between humans and bees. It offers a refuge to encounter this alien species on a more egalitarian basis, mediated by technology and human thoughts. Working outside any institution, Apian is a non-profit bureau, a ministry of bees. It is heuristic, experimental, messy, serious, but above all tries to be honest. This platform is its main online presence and it is under continual revision; here sketches, ongoing and completed piece of works are first shown and archived.*

The name Apian is borrowed from Juan Antonio Ramirez who extensively used it in his essay The Beehive Metaphor (Reaktion Books 2000). Apian defines something – from an architecture to a behaviour, basically as broad as one’s imagination can be – related to bees. Whereas it was founded – and is still mainly operated – by myself (Aladin Borioli), the use of an alias aims to reveal its inherent collaborative face and encourage future exchanges, rather than hiding anything. I have a background in graphic design and photography, visual anthropology and an itch for philosophy rendered more concrete recently via a certificate programme in critical philosophy at The New Centre for Research and Practice. The research draws from personal and tangible experiences, having learnt beekeeping from my grandfather. Since then I’ve continued to keep bees by passion (yes, I do love bees – thanks Alexis Pauline Gumbs) and as a research method. 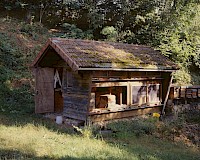 Picture of Apian’s apiary, in Bevaix, Switzerland. The picture was made, in 2012, a day when I was helping my grandfather working with his bees. [ID: In the middle of the picture stands a small wooden cabin surrounded by trees and green. The cabin’s door is open and we can see my grandfather veil. On the right, on top of a stone wall we can see some of the hives. A patchy early morning light bathes the cabin and the surrounding environment, moss is spreading on the roof slowly changing its colour. To give a symbolic example, it looks exactly how I imagined Thoreau’s cabin while reading Walden.]

Apian uses an odd kit of methods, mixing an anthropological approach – largely tainted by philosophical inputs – and the practice of art and beekeeping – all ultimately guided by cybernetics. It rarely takes definite forms, and is always updated – as an internet blog – corrected and revised. Collaboration is also a key method and so far, Apian has exchanged with different artists, scholars and beekeepers with shared sensibilities. To mention a few: Ellen Lapper, Laurent Güdel, Randolf Menzel, Lars Chittka and thousands of bees.

The outcomes consist of multiple fragments – polymorphous ethnographies mixing different media such as text, photography, sound and video – that are at the same time autonomous and related to one another. Once reunited, they assemble a sort of narrative universe which explores Apian’s meta question about the relationship that humans develop with bees. While mostly focusing on the common honeybees – the species we have developed most intimacies with via beekeeping practices – Apian aims to shed light on the importance of every bee. Bees are in danger. Whereas honeybees seems well defended by the love of many keepers around the world, it isn’t the case for all bees. The threats our bees are facing in apiaries are exacerbated when it comes to wild bees. Let’s by clear: we know the origin of these threats. They stem directly from the extractive and destructive processes of capitalism and the only option is to end this system as soon as possible. Ultimately, Apian’s mission is to think about another possible beekeeping practice outside of productive biases and in alliance with bees – in other words, a socialist beekeeping practice.

is an archive of research about bees made within a para-academic context. The index is updated on an irregular basis and submissions are more than welcome! If you want to contribute just send material over to index@apian.ch

Lenin as a Beekeeper